If you are buying a detached house in Manchester, selling a terraced house in Stretford, downsizing to a bungalow in Salford, or buying to let in Didsbury, we can help you with your conveyancing.

You will have a direct line straight through to your legal team, and direct email addresses for the people working on your conveyancing. You can be sure that your query will reach the right people, whether you want to ask about search fees, drainage and water fees or anything else related to your transaction.

We're a Conveyancing Quality Scheme accredited firm providing conveyancing to clients in Manchester and throughout the UK. This is a guarantee that our processes and procedures have been approved by the Law Society, showing that we operate to the highest standards.

In short, you get an excellent conveyancing service at an affordable price. You don't have the risk of going to the cheapest providers, most of whom aren't solicitors – instead you get a great service from fully qualified conveyancing solicitors.

Why you don't need a conveyancer based in Manchester

In the old days most people used their local solicitor for their conveyancing. You would visit their office to discuss your requirements and go through the conveyancing process and all documents would be hand-produced and posted or delivered by hand.

That face-to-face local service came at a price, however, and the truth is, it is no longer needed. With modern technology such as scanning, emailing and even Skype or Facetime video calls there is no need to use your local solicitor. Your conveyancer can be based anywhere and still provide a great service - even if he or she is in an office many miles away from Manchester, elsewhere in the UK or across the globe.

We have successfully dealt with thousands of conveyancing transactions all over the country, as well as with clients from the other side of the world. It is not unknown for us to talk to clients outside the UK using Skype – we once even we had clients in Thailand talking to us through an interpreter in New Zealand!

There will be no need for you to visit our offices or hand deliver documents – in fact, you need never leave your home. Our conveyancers will talk you through the process via phone and email, and everything works just as smoothly as it would if we were just down the road.

Home values in Manchester
Powered by Zoopla.co.uk
Manchester house prices
Get this widget 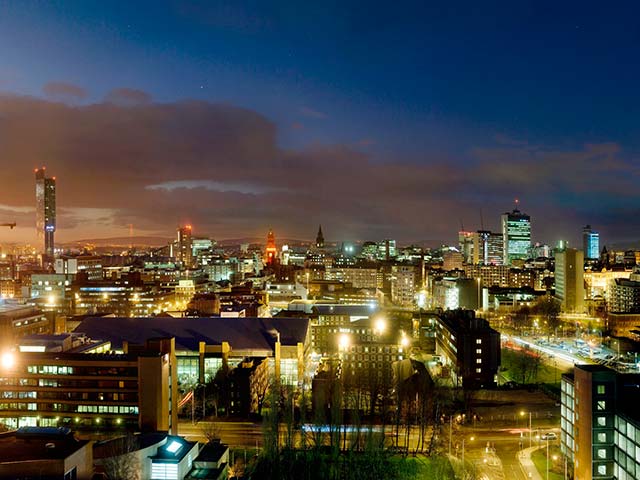 An increasing number of our clients prefer to deal with the entire conveyancing process online, through email and Skype, as well as over the phone. This is often referred to as “online conveyancing”, but the process and standard of conveying we provide will be exactly the same as if you were dealing with us face-to-face.

Many people find online conveyancing simpler and more convenient, as it means you can contact us when it is convenient for you, rather than needing to take time out of your day during office hours. The process remains completely secure and you can even share important documents with us online with total confidence due to our high quality cyber security precautions.

Every local authority is different. We use an excellent, trusted national search provider, which means we can provide reliable searches to clients in Manchester and all over the country. The search provider we use is fully insured, meaning your interests stay protected, whatever happens.

How the conveyancing process works

Whether you're moving to Manchester or away from Manchester, our conveyancing team can help you do so cost-effectively with the minimum of fuss and inconvenience.

Fees for conveyancing in Manchester

All our conveyancing fees are dependent on the nature and value of the transaction, so we naturally charge a bit more for more complicated and high value work. However, the fee charged will be the same for a customer in Newcastle as it would be for someone in London, or indeed in Manchester.

There are some aspects of our conveyancing fees that we can't change as fees charged by other bodies such as HM Land Registry, or by HMRC for Stamp Duty Land Tax (SDLT) are out of our control.

Manchester was one of the leading centres of the industrial revolution, initially driven by textile manufacturing. It later became a major centre for engineering, banking and insurance. Manufacturing in the city declined in the second half of the 20th century and now Manchester’s economy is focused on the service industry, education, health, distribution and IT.

Many major businesses are headquartered, or have a significant presence, in the city including The Co-operative Group, Umbro, Kellogg’s, Adidas, Siemens, AstraZeneca, Google and Pannone. The nearby city of Salford is one of the UK’s major broadcast media hubs, with the BBC, ITV and Sky all have significant operations in the area.

Manchester has a distinctive architectural style, with the wide spread use of red brick throughout the city and a large number of Victorian buildings adding to its character. It is also home to six nature reserves, including Chorlton Water Park, Boggart Hole Clough and Highfield Country Park.

The city is one of the UK’s strongest cultural centres, being particularly well known as the birthplace of many successful bands, including Oasis, The Smiths, Joy Division, The Stone Roses, The Fall, Elbow and Take That.  Manchester has a number of significant music venues, including the 21,000-seat Manchester Arena, which is the busiest indoor arena in the world. Other venues include Manchester Apollo, Albert Hall and the Manchester Academy. The Royal Northern College of Music and Chetham’s School of Music are both based in the city, making Manchester a leading centre for musical education.

Manchester also has a number of exceptional performing arts venues, including Manchester Opera House, the Palace Theatre and the Royal Exchange Theatre. The Manchester International Festival has been held in the city every two years since 2007.

Manchester is also well known for its large gay and lesbian community, centred on the Canal Street area. The area contains a number of LGBTQI+ bars and attracts around 20,000 visitors each weekend, as well as being the site of the annual Manchester Pride festival every August.

As one of the UK’s major transport hubs, Manchester is particularly well connected to the rest of the country and internationally via Manchester Airport – the UK’s third busiest airport. The city is particularly well served by local and national train services, with Manchester’s four train stations being the fourth busiest group of stations in the UK. Trains to Birmingham take around 1 hour 30 minutes, while trains to London Euston take around 2 hours.

For local travel, Manchester has an extensive bus network and the Manchester Metrolink tram system, making getting around the city without a car particularly easy.

Bolton is located 10 miles northwest of Manchester and, with a population of 128,139 according to the 2011 census, it is a major settlement in its own right. Although historically part of Lancashire, Bolton is now at the centre of its own authority, the Metropolitan Borough of Bolton.

The town has a relatively diverse economy, with many jobs in service industries, such as data processing, call centres and IT, as well industries such as hi-tech electronics, paper manufacturing, packaging, textiles and food production. The Reebok clothing brand has its European headquarters in Bolton, while the town is also home to Warburtons bakery.

Bolton is also popular with tourists, thanks to attractions such as Hall i’ th’ Wood, Smithills Hall, Barrow Bridge and the Bolton Steam Museum. The town contains a number of examples of neoclassical architecture, including the Grade II listed town hall, designed by William Hill.

Bolton is connected to the rest of Manchester by various local roads and buses coordinated by Transport for Manchester. It is also well connected nationally by the A6, A666 and the M61, as well as by Bolton railway station, which is on the West Coast Mainline and takes passengers to Manchester Piccadilly, plus destinations such as Wigan, Southport and Blackburn.

Bury is a town 8 miles north of Manchester and is the administrative centre of the Metropolitan Borough of Bury. The town has a population of around 78,723 based on figures from 2015, while the borough was home to 187,474 people in 2011.

Bury is well known for its many independent shops and food outlets, as well as its traditional market with a number of world famous black pudding stalls. The town also has a £350million shopping centre, The Rock, opened in 2010, as well as a cinema, bowling alley and various popular chain stores.

Bury has good connections to the local area, including Manchester by bus and trains, as well as being on the Manchester Metrolink tram network.

Oldham is located 7 miles northeast of Manchester and is the centre of the Metropolitan Borough of Oldham. The town has a population of 96,555 at the 2011 census, while the borough’s population was recorded as 230,800 in 2015.

Oldham is connected to Manchester by buses and trams, as well as being easily commutable by car, making it a popular choice for those working in Manchester.

Rochdale is 10 miles northeast of Manchester at the centre of the Metropolitan Borough of Rochdale. The town had a population of 107,926 at the time of the 2011 census, while the borough’s population was 211,699 at the same time.

A large percentage of Rochdale’s residents work in Manchester and other surrounding towns. Rochdale is well connected to the city and the rest of the local area by bus, rail and the Manchester Metrolink tram network.

Stockport is a town 7 miles southeast of Manchester with a population of 136,081. It is the administrative centre of the Metropolitan Borough of Stockport, which has a population of around 290,600 according to mid-2016 estimates.

The M60 and A6 meet at Stockport, making it convenient for travel to Manchester and London. Stockport railway station is connected to the West Coast Main Line, with regular trains to Manchester, London, Sheffield, Liverpool, Birmingham, Bristol and many other major cities.

Wigan is a town 16 miles northwest of Manchester and is the administrative centre for the Metropolitan Borough of Wigan. The town’s population was 97,000 in 2011 while the borough’s population was 318,100.

Wigan offers a number of jobs in retail, food manufacture and distribution, while also being popular with commuters to Manchester. It is well connected by road, being at the meeting point of the A49 and A577, which link to the M6, M61 and M58. The town also has two railway stations and a strong local bus network.