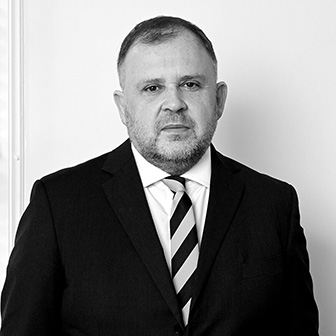 Chris was educated at Nottingham High School (along with Kenneth Clarke, Ed Balls, DH Lawrence and others). He studied law at Northumbria University and attended the Bar Vocational Course at the Inns of Court School of Law. Chris was called to the bar in 1993 and later re-qualified as a solicitor. He initially practised as a barrister on the Midland and Oxford Circuit prior to joining Bird & Co. Solicitors to head up the Criminal Law Department.

Chris became a partner at the Firm in 1996 and became Senior Partner in April, 2001. He oversaw the Firm’s expansion and it’s subsequent conversion to LLP status.

Chris specialises in criminal law. He appears regularly in the Crown Court and also in the Court of Appeal (Criminal Division). He is recognised as one of the leading criminal lawyers in the Midlands and acts for Corporate Clients and individuals. He is frequently led in serious and complex cases.

Chris’s practice is predominantly criminal defence, both private and legally aided. He also prosecutes for Government Departments including DEFRA and the Environment Agency. He is a respected advocate and a formidable opponent used to litigating serious and complex cases. His clients respect his measured and frank advice and his enthusiasm within the adversarial system.

Some of his more notable cases include:

5 Defendant murder case – thrown out by Judge after police “bugging”

The Marian Bates murder in Nottingham. National TV coverage of the murder of a woman in her Jewellery Shop in Arnold, Nottingham

Defended man accused of murdering wife. Case went before Court of Appeal regarding point of public importance in the starting points for sentencing in murder cases

Represented the underworld enforcer who disappeared from Court before the verdict in a robbery trial had been recorded. Subsequently, successfully appealed against the sentence, despite the client being on-the-run. Successfully appealed confiscation order under the Proceeds of Crime Act 2002 in the Court of Appeal, instructing Chris Jeyes, in-house counsel at Bird and Co. Case decided 22 March 2011.

The Mezz Bar murder in Lincoln. Junior. Led by Nigel Rumfitt QC and Maureen Baker QC (both from 7 Bedford Row). Case involved a stabbing in a busy nightclub in Lincoln in May 2010. Defendant the first appellant to appeal to the Court of Appeal under the recent changes in the law under Schedule 21 CJA 2003, section 5A.

Counsel for Stephen Butler who was charged in relation to a large scale fraud against the Metropolitan Police Service against the backdrop of the 7/7 Bombing Investigation. Dealt with Confiscation Proceedings thereafter under the Proceeds of Crime Act 2002.

Led by Maureen Baker QC (7 Bedfrod Row) in multi-handed worldwide distribution of indecent images case. Investigation spans 2006-2011 and Chris represented an ISP charged with facilitating the distribution of images and associated money laundering offences. Case came to trial at Nottingham Crown Court in June 2011 and following extensive legal argument before the trial judge, Calvert-Smith J, the case was resolved with Chris’s Client pleading guilty to two counts of distribution covering a 7 year period and being sentenced to 15 months imprisonment. Following this plea, the Crown elected not to proceed against the Defendant’s wife (represented by Chris Jeyes and Tim Spencer QC) who was cleared.

Chris dealt with Proceeds of Crime Act (POCA) litigation thereafter with Rory MacMillan (Solicitor in the POCA Team at Bird & Co Solicitors LLP). They were able to reduce the recoverable amount claimed by the prosecution by thousands of pounds.

Chris is represented a yound man charged with perverting the course of justice in connection with the murder of Alan Cowley which occurred in November 2010. Mr Cowley was killed near the Ballast Pits in Sleaford, Lincolnshire and two young men faced trial in 2011 in connection with his death. Chris was led by Tim Spencer QC (7 Bedford Row). Chris’s Client was acquitted at the close of the Prosecution Case following a submission of “No Case to Answer”, on the direction of the Trial Judge, His Honour Judge Michael Heath.

Representing John Thorpe, accused of the murder of his elderly mother in Grantham in March 2011. Chris is being led by Jeremy Benson QC of 18 Red Lion Court. Mr Thorpe pleaded guilty to manslaughter at Nottingham Crown Court on Monday 21st November 2011. He was sentenced by Mrs Justice Macur on the 21st December 2011. John Thorpe was oredered to be detained in hospital under the Mental health Act 1983, together with a Restricition Order.

Chris represented Bev Boughen at Norwich Crown Court in relation to offences of theft in breach of trust. Mrs Boughen had worked as the Clerk and / or Finance officer for several Parish Councils and defrauded them of in excess of £60,000.00. Sentenced to 18 months imprisonment.

EMSOU Serious Organised Crime Investigation into the supply of class A drugs in the East Midlands and beyond. Chris has been instructed in this multi-handed prosecution which is being conducted by the CPS East Midlands Complex Casework Unit (CCU). Case is ongoing.

Chris represented KM, a successful personal trainer and salon owner, accused of producing class B drugs. The evidence centered on a police search warrant which was executed at a large scale commercial cannabis “factory”. KM was arrested a the scene of the “factory” allegedly covered in cannabis. KM was accused of producing the drug with her partner and 3 others. Chris managed to successfully exclude key prosecution evidence in a trial within the tria at the Crown Court, which ultimatley led to a successful submission to the Trial Judge that there was no case to answer for KM. Chris’s Client was cleared, as was her partner (also represented by Bird & Co Solicitors LLP) and very relieved. Lindsey Whotton in the POCA Team was credited with successfully obtaining the swift return of the KM’s Porsche 911 Turbo motor car after it was seized by Police following the initial raid.

In his spare time, Chris’s interests include scuba diving, road cycling, going to the gym, and cooking.