With the housing market making a resurgence after a tumultuous 2020, the UK has since experienced rapid growth thanks to thousands of homeowners looking to relocate to a different part of the country.

A study from Bird & Co has uncovered the UK’s most sought-after locations, having analysed June 2021 figures from the Office of National Statistics, HM Land Registry and Rightmove, amongst several other reputable sources.

Within each region, the study breaks down the stats by local authority, including statistics on:

The results showed some clear trends while throwing up a few surprises. Devon and Norfolk pipped the home-counties to the post for first and second place, reaffirming a change in attitude from homeowners who are now looking to escape the densely populated regions in favour of a more peaceful way of life.

Other winners included Midlands counties with large universities drawing in the younger population, and more rural places, such as Cornwall and West Sussex; the only two regions with local authorities dominated by elderly migrants.

So, whether you’re thinking of relocation, or are big on hometown pride, read on to find out where the UK’s most popular counties are this year… 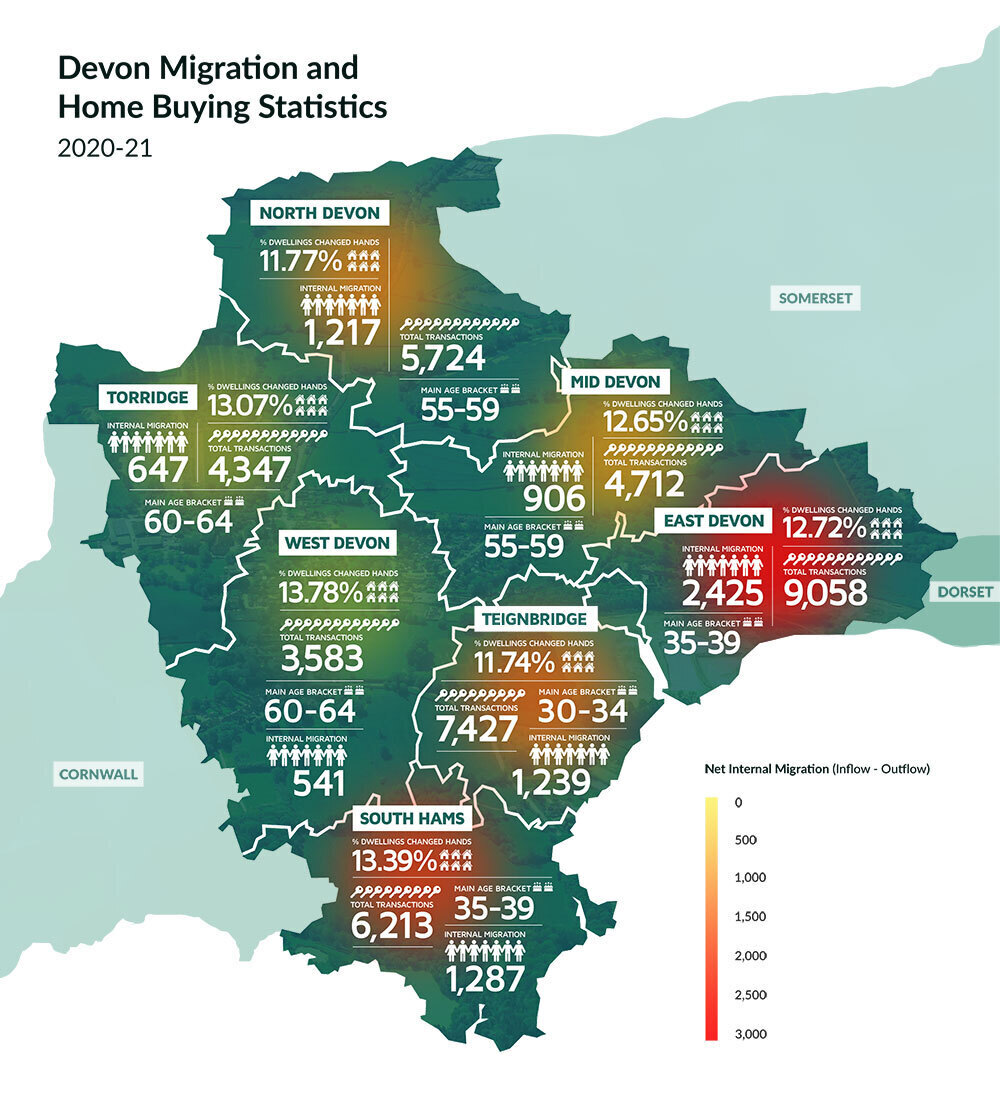 Known for its stunning beaches and bustling historic cities, Devon is the region that has experienced the most migration out of all regions in the United Kingdom.

Perhaps due to its capacity, East Devon is by far the most flocked to area of the region, receiving a net migration rate of 2,425 persons in the past year.

East Devon also had the highest number of transactions, suggesting people in this area tend to move a lot as opposed to those in Exeter – a town that upholds an impressive stat of 96.43% of people staying within the region.

Interestingly, the main age brackets that move to Devon comprise of 35-39-, 55-59- and 60–64-year-olds, a statistic that is overall much higher than that of other regions. These findings suggest that middle-aged homeowners are moving to the region, either to downsize or retire.

Situated on the east coast of England, Norfolk has over 90 miles of unspoilt coastline, forests, nature reserves and picturesque market towns. This year, it soared ahead of Kent, Essex, Derbyshire, Leicestershire, Warwickshire and Cornwall, who beat it in the previous year.

The most popular region of Norfolk appears to be South Norfolk, with over 2,345 people migrating to the area in the past year. Norwich had more people leaving the town than it did moving in, a rather surprising stat until you consider its dense student population who were unable to attend the university during the pandemic.

The largest county in the South East, Hampshire, follows as the third most coveted UK place to live, and with its perfect blend of coast, city and country Hampshire, is it any wonder?

While most people are moving into East Hampshire and Eastleigh, it’s Basingstoke and Deane that are experiencing an overwhelming number of property transactions, suggesting that residents living in the area are content with the location but not their current home.

The ages of people moving into the region seem to vary, with the eldest living in the New Forest and the youngest living in Winchester.

Often referred to as the ‘Garden of England’, Kent borders London as one of the UK’s most lucrative home counties.

According to the data, the most popular place to move is the county town of Maidstone, with a staggering 1,205 net having moved there in the last year, and a total of 10,459 transactions happening within the area. This is the largest transaction rate of all 10 counties, second to that of Basildon in Essex.

What’s more, Kent has the most loyal homeowners, with an impressive 93.72% not moving from the region, an interesting stat when you take into consideration the heavy influx of the younger generation (mainly 20-24-year-olds).

With its bustling towns, universities, idyllic orchards, and easy access to London, it seems that Kent is an up-and-coming county for first-time buyers wanting to get onto the property ladder.

From the glitz and glamour of Brentwood to the breath-taking Blackwater salt marshes, and historical town of Colchester, Essex sneaks into the top five.

While Colchester and Chelmsford appear to have the highest number of transactions, it's Tendering and Uttlesford that homeowners are moving to. Interestingly, Uttlesford, with a large migration age of 30–35-year-olds, is seeing the most stagnant housing activity, after taking into consideration transaction numbers per dwelling.

In the past year, Harlow had more people leave the town than arrived, but those that have decided to stay have remained in the same home, with the lowest percentage of dwellings changing hands (11.69%).

Home to the Peak District and breath-taking Derbyshire Dales, Derbyshire is the first of only three counties outside of the South of England to make it onto the UK’s top 10 most sought-after locations.

Hailed for its links to Shakespeare, Warwickshire is perhaps one of the most historic of all entries and consists of theatres, cobbled streets, romantic canals, and a medieval Cathedral and Castle.

The most popular town would appear to be Stratford-on-Avon, despite Warwick tipping the numbers of properties in the area. Stratford has an impressive total net migration of 2,455, with Nuneaton and Bedworth at a low 415, holding the fort for the whole county, alongside Rugby, with net migration of 1,349.

Surprisingly, despite its historical undertones and beautiful scenery, it doesn’t seem to have a high population of retirees and is the only county to have a complete main migrant age population of 20–24-year-olds.

Lancashire is the most northern location on our list and, whether you’re looking to catch a glimpse of wildlife at Morecambe Bay, see the coastal plains at Ormskirk, or visit the world-famous seaside town of Blackpool, this region has much to offer in terms of coastline and country.

As well as having a plethora of things to do at the region’s doorstep, Lancashire is by far the most affordable place to live out of all ten locations, with an average house price of £191,573. In the Southeast of England, you would struggle to get a one-bedroom flat for below £200,000.

From the data, it appears most people are flocking to Wyre, Ribble Valley and Flyde, and leaving Hyndburn, Pendle, Preston, and Rossendale. It has a relatively small influx of migrants for a county of its size but maintains a strong and active housing market due to the loyalty of its longstanding homeowners.

Surrounded by beaches and with typically nicer weather, the UK’s most visited holiday destination, Cornwall, comes in at entry number nine.

With a total net migration of 4,935, and a dominant migrant age of 70-74, it’s clear that a lot of homeowners in the UK are seeking the most south-westerly region of the UK to relax and retire to.

Finally, West Sussex ends our top 10. Covering both coast and the South Downs National Park, this region has everything from hills, harbours, farmland, and market towns.

Its stately homes and striking beaches are a few reasons why it’s the most expensive place to live out of all entries, at a pricey average house price of £428,756.

Last year, Horsham received the greatest number of migrants, while Arun (9,990) had the highest transaction rate.

Whether you’re considering moving or are happy where you are, hopefully this list helped you decide where you’d like to live in the UK.

One thing is for sure, we live in a small but diverse and beautiful country, but population numbers are on the rise, as are house prices. So, if you’d like to get on the property ladder soon, now is your chance!

For more conveyancing advice about how to make the process of buying and selling a property smooth and efficient, visit Bird & Co’s website or call 01636 600656.

The data presented in this article has been taken from the Office National Statistics, HM Land Registry, Ministry of Housing, Communities & Local Government, and Rightmove.

All figures used in this study are as up to date as possible, generally taken from an official document published in 2021 or 2020. Time frames between sources may vary slightly, but all publication dates can be found via the link to each independent data source.

To figure out the percentage of ‘loyal’ homeowners in each region, we found the difference between the total number of transactions and the net internal migration, and divided the sum by the net transactions, so it is purely an estimate of the minimum value. When using the term loyal, we are referring to the number of people that already lived in the region and have remained there this year.

Although this data was sourced via reputable sources, its interpretations are of the Bird and Co researchers.